Planning for our plant Sale

We are planning to hold our next plant sale on Saturday 27th May in the Market Place Cirencester.  It will be alongside the usual Farmers’ Market that day, but we hope we will have extra space for all the plants donated.

This is to encourage you to start growing now, so that we have lots of plants ready to sell and raise money.  And if you want to help, that’s great as well. 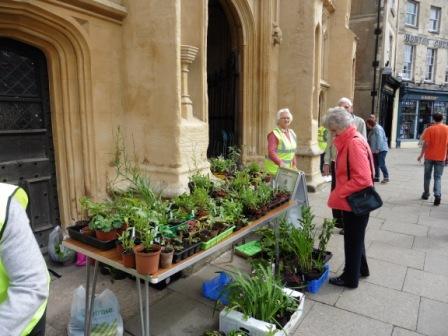 Lots of people and lots of cake

Hazel and Ailsa at the coffee morning

More than £700 was raised at the coffee morning on March 7th  and in addition there were some generous donations.  The Bingham Gallery was full of people, so as one supporter said “You must be doing something right…”  The  money is lovely and will pay for the summer bedding, but it was the fact that so many people came that was really good.  The support offered to us by the community is invaluable, and to see so many people prepared packing the room was marvellous.  We even ran out of cups and had to borrow some from the Churn project.  But the committee and  helpers were really tired at the end of it

Come to our coffee morning

Phoenix Gardeners invite you to a

COFFEE MORNING and Bring and Buy

Help us raise funds to make our town a vibrant place

Happy New Year to you all.

By the end of October we had already decided on our plug plants for 2018.  Over 2000 bedding plant plugs have been ordered.  They will be grown on in the greenhouses at Deer Park School.  Here is a photo of Pauline watering the plugs last year – its needs a lot of dedication.

Every autumn we refresh the tubs in the town centre and tidy the Abbey Grounds ready for the winter.  Each tub contains hyacinths (usually blue, but this time some pale lemon), two kinds of dwarf cyclamen, and a range of tulips to cover the season from mid-April until late May when we put the summer bedding in.

Phoenix Gardeners were proud to be invited to be the speaker for the Baunton and Stratton Horticultural Society  AGM.  The members were keen to hear about the growth and progress of Phoenix Gardeners, and full of admiration for the work of our volunteers.

Whilst we expected 2016 to be a difficult year, due to the Market Place regeneration, in fact it was a very positive year for the group. For those of you whose tubs kept shifting as the work progressed, I can only thank you for your good will and hope that it will be easier next year.

We had a successful plant sale in May, and our income was supplemented by being chosen as the “Good Cause” for the Chamber of Commerce raffle. This raised £637 – thanks to those who sourced raffle prizes and those who sold tickets on the night.

Our Open Gardens event in July raised £2460 in one afternoon. We donated £1000 to Cirencester Open Air Pool, £450 to Cirencester Society of Friends (who provided all the refreshments) and once we had paid for expenses of printing etc we banked about £900 for Phoenix Gardeners.

In September, the Abbey Grounds won a prize in the Front Garden Festival for the best public display, and with that came a £100 Dobbies voucher. One of our members won the best window box/street display and also donated her £100 voucher. 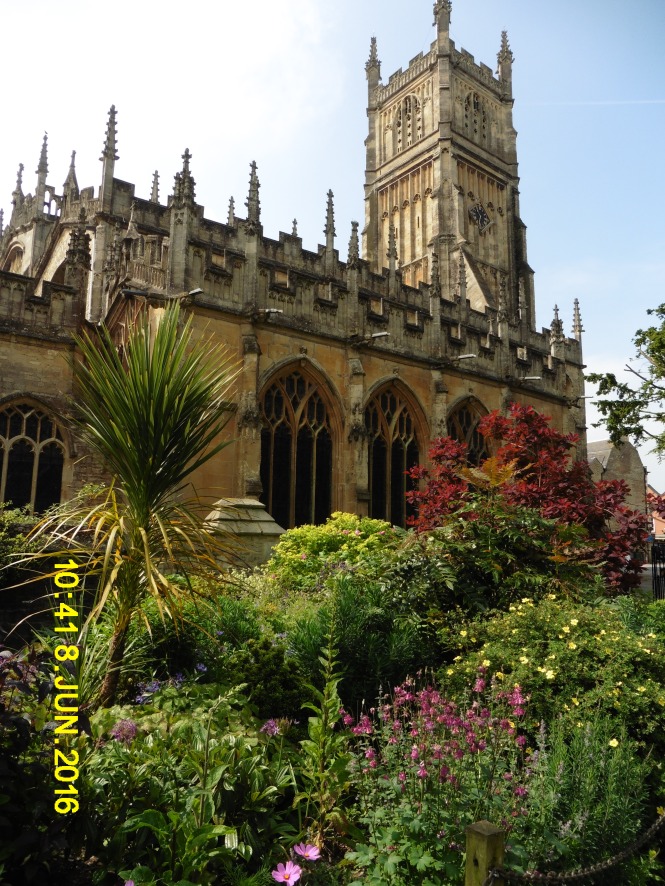 One negative note: we continue to suffer vandalism of some of the tubs. These seem to be those larger tubs which are on public thoroughfares leading out of the town centre.  We have tried to remedy the damage within a few hours of being notified of the problem, and generally have kept the areas affected looking tidy.  It is especially gratifying that we have had support from local residents in helping to sweep up the soil, but disappointing that one tub in particular has suffered repeated damage.  The planting of prickly hollies has not deterred people, and so we may need a new strategy for 2017.

Abbey 900: The town will celebrate the 900th Anniversary of the founding of St Mary’s Abbey.  We have decided to support this festival by planting the tubs and hanging baskets in the Abbey 900 colours which are shades of mauve, burgundy and grey.

Once more we are grateful to Deer Park School for bringing on the 2000 plants we use. They order the plug plants for us and tend them until we plant out in mid-May.  However, we have to pot on the plug plants so if anyone can spare two hours (or more)to help pot on the plug plants in March (dates to be agreed with the school) then please let Meg know.  Our potting on sessions are often jolly events, as we jostle each other in the poly tunnel, with lots of laughter and chatting.  Its a good way to spend a spring morning.

We shall be holding another plant sale in late May and would encourage you now to start propagating or sowing or dividing whatever you can.  The plant sale is our one annual event to raise money and our profile in the town.

We intend to spend some of the money raised last year on two major items. We hope to buy Plant Savers (i.e. water retaining devices) for all the tubs and troughs which don’t have them.  This will ease the burden of watering. If you have a trough or tub which does not have a Plant Saver then please let Meg know and we shall arrange for them to be installed when we plant up the summer bedding in May.

We will also buy some new water-retaining hanging baskets to enhance the Market Place.

Finally the £100 award from the Front Garden Festival will be spent on plants for the main flower bed in the Abbey Grounds, which won its award despite the only contributions to its plants being donations from other peoples gardens.

We are welcoming two new members this year, Pauline Farman and Dusty Bownman but we have also lost members who have moved, or moved on to other projects, so we can always use more hands, so please invite your friends to join in.

We routinely give talks to local groups, so if you know of any that are interested let Meg know.

Park Community Group/Phoenix Gardeners have been awarded a small grant by Cirencester Town Council to plant up the raised flower beds in Brewery Court (alongside the former Bramleys fruit and veg shop) to try and make this very neglected and shabby part of town look more attractive. The grant from the Town Council is small and will not cover the cost of buying all plants plus the bark mulch that will be needed, hence we are asking for donations of any plants  that people no-longer need in their gardens. Helena Griffith (a Phoenix Gardener as well as a local landscape designer) has worked out a planting plan.  Details of help required either with providing plants or with helping with clearing and planting are set out below.

The types of plants Helena has suggested are:-

However, this list is not exclusive, so if you have any plants you are able to  donate that you think will be suitable  please let Alison Horrocks know.  It is anticipated that the work will require 3/4 sessions to complete and the following dates have been  identified early in 2017:-

All sessions will run from 10.00 am to 12.30pm. If you will be able to come along and join in a working group, again, please let Alison Horrocks (horbox@hotmail.com) know. Alison will email again prior to each session to remind people that they are taking place but at this time of year whether sessions can go-ahead or not may be dependent on weather conditions.

You may have seen the announcement in the Wilts and Glos Standard or in Cirencester Scene, but there is now a plan to launch “Cirencester in Bloom”. I am attaching the letter from Geoff Carr in full below, but the important date to note is Thursday January 26th at 7.30 pm when a preliminary meeting will be held at Bingham House.

Please come to the launch of Cirencester in Bloom 2017 on Thursday 26th January at 7.30pm in Bingham House, Dyer Street. Because you entered the Front Garden Festival last year you have already shown your interest in horticulture and civic pride and your willingness to get involved in a local, horticultural project.  I know from my experience of organising last year’s Front Garden Festival that without your support Cirencester in Bloom simply won’t be the fabulous horticultural treat that Cirencester deserves.

There will be lots to discuss at the launch meeting but there are two crucial objectives for the evening. Firstly, we’ll be inviting people to form a working group that will go on to organise Cirencester in Bloom 2017; secondly we’ll be inviting one or more individuals to put themselves forward as lead coordinator(s) for Cirencester in Bloom 2017. We want to improve on last year’s event and it would be really useful if you could have a think about the things you consider to be its strengths and those things that need improving, removing or adding. Any comments would be gratefully received; you can either call me (Geoff Carr), email me or wait until the meeting on the 26th of January.

Please spread the word to family and friends and bring them along too if you’d like to help Cirencester really start to bloom in 2017!

If you have any questions or would like more information, please do not hesitate to contact me: geoff_carr@hotmail.com or 07719 896039.

Dates for your diary

Mid March : dates to be agreed – pot on the plug plants at Deer Park School

Mid May – planting out of the summer bedding around the town

All in all a busy time ahead. Best wishes and thanks for your support 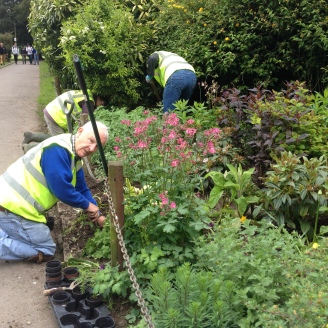 We won the category for best public display for the main flower border in the Abbey Grounds.  Some of the judging remarks said ” A bold display of colour which enhances a valuable open space”.  The team were really pleased, especially as no money has been spent on the bed so far; we have planted it up with rejects from other peoples’ gardens.  The aim is to keep it looking tidy at all times and as colourful through as much of the year as we can.  Here is a picture of some of the volunteers working on the bed.

Raising money to help others

This year our Open Gardens event was used to raise money to help Cirencester Open Air Pool carry out its major refurbishment work.  We were able to give them £1000 towards the cost.  More importantly the day was a great success and in total raised £2450.  Our other beneficiary was Cirencester Friends Meeting House who have always been generous supporters of Phoenix Gardeners and helped us with venues when we needed them.

The town was buzzing during our open day and normally quiet streets saw floods of people purposefully walking up and down, enjoying the lovely gardens.

Once again, Phoenix Gardeners and the town have to thank Ian and Paul at the Market Garden for their generous donation of plants which are used in the tubs in the Abbey Grounds. Their good will and support is always appreciated and we hope they are pleased with the results

Every penny you give makes a difference and we try to use it wisely.